The following summaries provide further analysis of the key themes or conduct that was raised in public submissions received by the Commission. 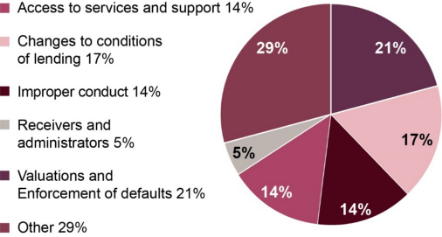 Valuations and enforcement of defaults

Changes to conditions of lending

Over 65 submissions received in relation to agricultural finance claimed lenders unilaterally made changes to the terms on which a loan was offered. Key concerns raised included:

Difficulty in obtaining access to banking services and appropriate support

Over 55 submissions referred to issues with obtaining appropriate access to banking services, failure to respond to requests for hardship assistance, or inadequate support from lenders following default. These issues included:

Individuals also raised issues about receivers and administrators. As noted in the Interim Report, receivers and administrators are not financial services entities as defined in the Letters Patent and so their conduct does not fall directly within the scope of the Commission’s inquiries. However, issues relating to the appointment of receivers by banks were considered by the Commission in its Round 4 public hearings on the basis that they concerned the conduct of financial services entities and so fell within the Terms of Reference.

In addition to the themes above, over 45 submissions referred to the farmer’s participation in farm debt mediation. These submissions generally raised concerns about the process, suggesting that the process favoured the financial services entity or did not lead to satisfactory outcomes from the farmer involved, or that the financial services entity had not agreed to participate in voluntary farm debt mediation processes when requested.