ELIZABETH THE SECOND, by the Grace of God Queen of Australia and Her other Realms and Territories, Head of the Commonwealth:

WHEREAS Australia has one of the strongest and most stable banking, superannuation and financial services industries in the world, which performs a critical role in underpinning the Australian economy.

AND most Australians are consumers of banking, superannuation and other financial services. The superannuation system alone in Australia has created more than a $2 trillion retirement savings pool, which continues to grow rapidly and which compels all working Australians to defer income today for their retirement.

AND all Australians have the right to be treated honestly and fairly in their dealings with banking, superannuation and financial services providers. The highest standards of conduct are critical to the good governance and corporate culture of those providers.

AND these standards should continue to be complemented by strong regulatory and supervisory frameworks that ensure that all Australian consumers, including business, have confidence and trust in the financial system.

NOW THEREFORE We do, by Our Letters Patent issued in Our name by Our Governor-General of the Commonwealth of Australia on the advice of the Federal Executive Council and under the Constitution of the Commonwealth of Australia, the Royal Commissions Act 1902 and every other enabling power, appoint you to be a Commission of inquiry, and require and authorise you, to inquire into the following matters:

(a) whether any conduct by financial services entities (including by directors, officers or employees of, or by anyone acting on behalf of, those entities) might have amounted to misconduct and, if so, whether the question of criminal or other legal proceedings should be referred to the relevant Commonwealth, State or Territory agency;

(b) whether any conduct, practices, behaviour or business activities by financial services entities fall below community standards and expectations;

(c) whether the use by financial services entities of superannuation members’ retirement savings, for any purpose, does not meet community standards and expectations or is otherwise not in the best interests of those members;

(d) whether any findings in respect of the matters mentioned in paragraphs (a), (b) and (c):

(ii) result from other practices, including risk management, recruitment and remuneration practices, of a financial services entity, or in the relevant industry or relevant subsector;

(f) the adequacy of:

(i) existing laws and policies of the Commonwealth (taking into account law reforms announced by the Commonwealth Government) relating to the provision of banking, superannuation and financial services; and

(ii) the internal systems of financial services entities; and

(iii) forms of industry self-regulation, including industry codes of conduct;

to identify, regulate and address misconduct in the relevant industry, to meet community standards and expectations and to provide appropriate redress to consumers;

(g) the effectiveness and ability of regulators of financial services entities to identify and address misconduct by those entities;

(h) whether any further changes to any of the following are necessary to minimise the likelihood of misconduct by financial services entities in future (taking into account any law reforms announced by the Commonwealth Government):

(i) the legal framework;

(i) any matter that has occurred or is occurring overseas, to the extent the matter is relevant to a matter mentioned in paragraphs (a) to (h);

(j) any matter reasonably incidental to a matter mentioned in paragraphs (a) to (i).

(k) We direct you to have regard to the implications of any changes to laws, that you propose to recommend, for the economy generally, for access to and the cost of financial services for consumers, for competition in the financial sector and for financial system stability; and

(l) We authorise you to have regard to comparable international experience, practices and reforms.

AND We further declare that you are not required by these Our Letters Patent to inquire, or to continue to inquire, into a particular matter to the extent that you are satisfied that the matter has been, is being, or will be, sufficiently and appropriately dealt with by another inquiry or investigation or a criminal or civil proceeding.

AND We further declare that you are not required by these Our Letters Patent to inquire, or to continue to inquire, into a particular matter to the extent that the matter relates to macro-prudential policy and regulation.

AND We direct you to give priority to matters that in your opinion, have greater potential for harm if not addressed expeditiously.

AND We further declare that you may decide not to inquire into a particular matter falling within the scope of paragraphs (a) to (j), but any such decision is yours alone.

AND We further declare that you may inquire into any matter mentioned in paragraphs (a) to (j) to the extent that the matter relates to or is connected with the peace, order and good government of the Commonwealth and any public purpose or any power of the Commonwealth.

AND We direct you to make any recommendations arising out of your inquiry that you consider appropriate.

AND We declare that you are a relevant Commission for the purposes of sections 4 and 5 of the Royal Commissions Act 1902.

AND We declare that, in exercising your powers under Part 2 of the Royal Commissions Act 1902, you are to inquire into the matters falling within the scope of paragraphs (a) to (j) only to the extent that Commonwealth constitutional power extends to those subjects of inquiry.

AND We declare that you are a Royal Commission to which item 5 of the table in subsection 355-70(1) in Schedule 1to the Taxation Administration Act 1953 applies.

AND We declare that in these Our Letters Patent:

(a) an ADI (authorised deposit-taking institution) within the meaning of the Banking Act 1959; or

(b) an entity that carries on a business of undertaking liability, by way of insurance (including reinsurance), in respect of any loss or damage, including liability to pay damages or compensation, contingent upon the happening of a specified event, including:

(i) a general insurer (within the meaning of the Insurance Act 1973); and

(ii) an entity that carries on life insurance business (within the meaning of the Life Insurance Act 1995); or

(c) a person or entity required by section 91lA of the Corporations Act 2001 to hold an Australian financial services licence, or who is exempt from the requirement to hold such a licence by virtue of being an authorised representative; or

(d) a person or entity that:

(i) is an RSE licensee of a registrable superannuation entity (within the meaning of the Superannuation Industry (Supervision) Act 1993); or

(ii) has any connection (other than an incidental connection) to such an RSE licensee; or

(e) a person or entity that acts or holds itself out as acting as an intermediary between borrowers and lenders;

but does not include an entity that is a Commonwealth company or Commonwealth entity (both within the meaning of the Public Governance, Performance and Accountability Act 2013).

(a) constitutes an offence against a Commonwealth, State or Territory law, as in force at the time of the alleged misconduct; or

(b) is misleading, deceptive, or both; or

(c) is a breach of trust, breach of duty or unconscionable conduct; or

(d) breaches a professional standard or a recognised and widely adopted benchmark for conduct.

(m) require you to begin your inquiry as soon as practicable; and

(n) require you to make your inquiry as expeditiously as possible; and

(o) authorise you to submit to Our Governor-General an interim report, that you consider appropriate, not later than 30 September 2018; and

(p) require you to submit to Our Governor-General a final report of the results of your inquiry, and your recommendations, not later than 1 February 2019. 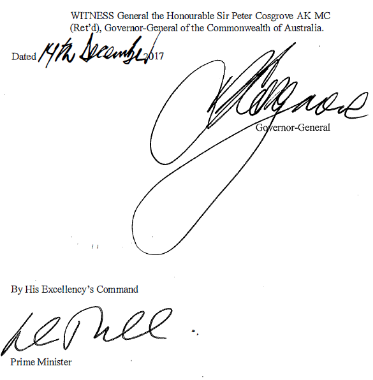 IN WITNESS, We have caused these Our Letters to be made Patent. 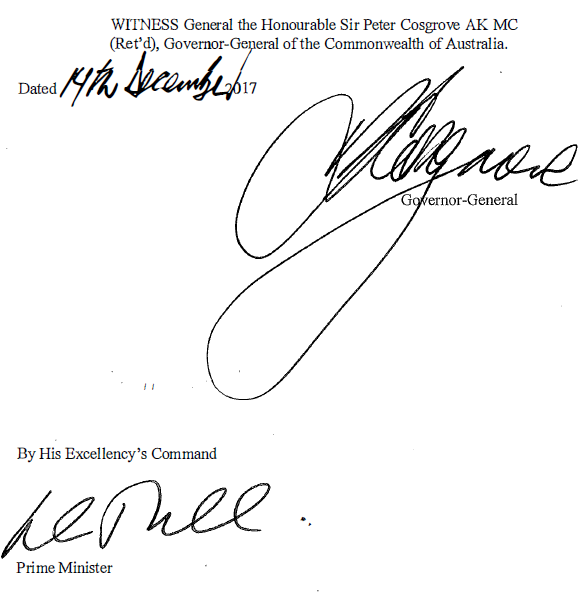